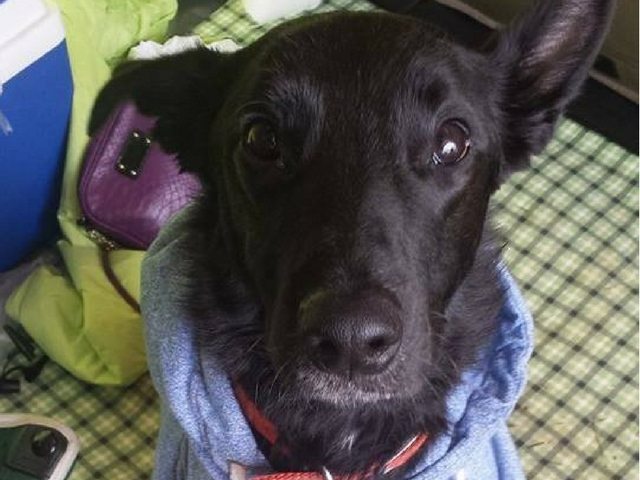 THE MANY FACES OF SHADOW…. 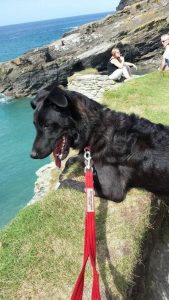 ‘We got Shadow on 4th May 2013 as a 4 month old stray from Manchester dogs home, He had no name and was due to be given a name the day after as he would have been at the shelter 11 days then, we took Shadow into the play area and played with him, and the assistant said we could take him home that day.

The journey home shadow was anxious, we took him straight to meet the other dogs in the family at the time, 2 ladies called Maggie and Pippa, he instantly loved them, he has spent many a day playing with them whilst being looked after there.

We took shadow home to 4 cats, one later passed away and we gave a home to another cat and got a Bengal Kitten too so there were 5 cats in the house and shadow has no issues with them, He got bossed about by the stray we got, but he wasn’t getting on with the other cats so had to be rehomed.

Shadow gets playful with one of the cats, but at the same time she fusses round his legs all the time, he sleeps next to 2 of them he is ignored by one of them, and the Bengal kitten loves him as they kind of grew up together.

We have 2 Degu’s in a large cage also which he has no issues with.

Shadow loves going on long walks, we used to run together , up to 6 miles after we had trained, he loves being played with and chewing his bones playing tug of war, chewing on toys, he sleeps at the bottom of the bed but always sneaks onto the bed if he has the chance.

We used to shave him in summer and he looks like a whippet, he is so fast and loves to chase his toys, balls, ropes, anything you can throw for him he will chase, he loves muddy stinky puddles in the park and adores camping and playing in the sea on holiday.

Shadow has been around a toddler and 3 babies who are all growing up now and he has never shown any aggression toward them. He doesn’t like being sat on or pulled by them, he’ll have a grumble and walk off.

We have taught him, in sequence,to:

Paw (then Right) hold your hand out

Kiss (touches his nose to your nose or mouth) and will try to snog you if he can. Then he gets a treat.

Up ( he will jump up and kiss your face)

I make him sit when I’m dishing his food and when I’ve finished mixing it I say kiss and we touch noses, and I make a kiss sound, he can then have his food. I feed him twice a day, with half a dog tin of biscuits and a full tin of dog food, he likes Winalot.

He will tend to eat his own poo if he is fed pedigree chum, I don’t know if that’s because he was fed that in the dogs home and he was still hungry so would eat his poo then. We noticed that when my husband took his belt off, shadow would run away, so he may have been beaten in the short time before he was picked up as a stray puppy.

Shadow is a very loving dog and follows me everywhere, to the point where he is stepping on the back of my slippers, he will take every opportunity to stick his nose in your face if you bend down cos he wants kisses and he is very pleased to see me when I get home, that’s when I let him jump up and catch his paws so he can give me a kiss.

He will chase his tail and bring his toys to you when he wants to play, which is all the time, he will sit on the couch when he has been to the park, flaked out exhausted.

I have to rehome shadow due to a number of factors:

Shadow has always had separation anxiety, and I used to take him to a friend 2 of 3 days a week where he would spend the whole day with 2 other dogs and my friend, But that sadly couldn’t continue due to the friends work commitments, so Shadow has been left on his own for nearly 10 hours a day, whilst we are at work, which is really not kind for him, he has the Bengal cat for company but its not good for him to be alone for that amount of time.

I am almost 6 months pregnant and I will not be able to look after shadow and a baby as Shadow is also like a child.

Shadow is such a boisterous dog and full of energy, I haven’t got the time or energy now, and cant see it changing in the near future for me to be able to care for him in the way that he so much deserves.

I am not able to walk Shadow as he is protective of me with other men walking past, he will bark at them and the same when we are in the car. He is not too keen on car journeys which also leads me to believe he was driven somewhere and dumped and has never forgotten that.

I am very sad to have to rehome Shadow, but I am being cruel by keeping him. He deserves so much more than I can give him’.

It is clear that Shadow is quite a complex character, a charming dog who is sociable and feels no threat from children, babies other animals and is better with women, however he does have a deep and fearful mistrust of men which could stand in the way of a swift adoption procedure, but I’m sure once trust can be gained he will be a friend forever.

Shadow is neutered & identichipped, but his vaccinations have lapsed. We must also stress that not only is Shadow not here at JFD, he is not even in Derby. Having exchanged many emails with Suzie, Shadow’s owner, throughout the day, it wasn’t until the last email that I discovered he lives in Warrington. I suggested to Suzie that being as they lived in that area and that he was originlly adopted from Machester City Dog’s Home that perhaps it would be best if Shadow was returned to them. This was her reply:

‘Yes I contacted Manchester dogs home twice and both times they said they have no kennels and that was that!!

I have taken him to the dogs trust and he barked at the assessor so they sent me home.

I contacted my local charities who said they only take in strays, try somewhere else, I have asked friends and family members to have him, which they cant, I have asked them to ask around.

I have contacted another organisation like yourselves who will also put him on their website. So hopefully between the both of you Shadow will find a home’

If you think you can offer any of our lovely dogs a loving home please email us by clicking here. Before you email – please take a note of these quick questions that we will ask you when you enquire.