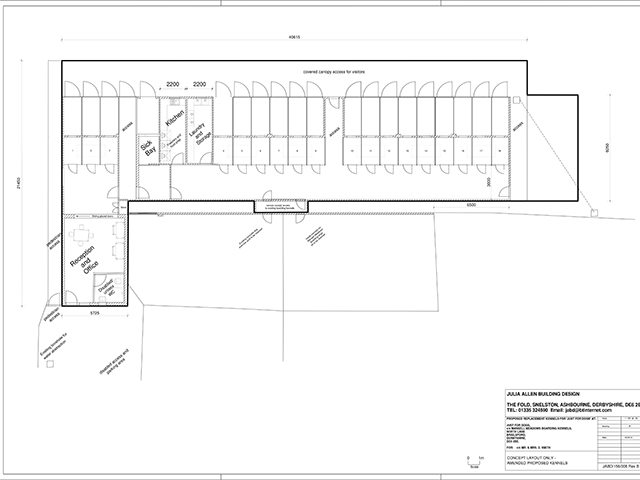 As we approach our 19th Anniversary we are delighted to be able to share with you some very exciting news.

Just for dogs is a registered charity, established in 1997. The rescue is based at Mansell Meadows, Brailsford, the property of which belongs to Margaret and Doug Smith (founder members of the charity) who have lived and happily raised a family of four children there. They also run a boarding kennel business, which is their main source of income and totally separate from the rescue block, the success of this enterprise has, to a large degree, subsidised JFD allowing the use of part of the property – a kennel block, utility facilities, office space, car park & field – totally free of charge. However, even taking into account these huge savings, it has still been an on-going struggle to keep the charity afloat and on several occasions, over the years, JFD have faced closure due to a lack of funds.

The current rescue block is an original bank of kennels that were here when the Smiths purchased the property in 1991 and are now 35yrs old and for want of a better phrase have ‘seen better days’! Last July we were discussing the dilapidated state of the outside runs, realising they really were beyond repair, having been rubbed down and painted that often there was now barely anything left to rub! We just didn’t know where the money was going to come from to purchase any replacement framework.

A few weeks later Mike & Jacquie Baxter, also founder members (with Mike being a popular figure in the events ring at our dog shows), discovered that a small animal trust fund were making £25,000 grants available to small charities with the proviso the money was used to improve or maintain kennel life of homeless dogs living in rescue kennels – the money was not to be placed in a bank account to fester.   As £25,000 was more than was required to replace the outside runs we decided to be a little more adventurous and have the block completely flattened and rebuilt, also adding a small reception/office. For the last 19 years the reception area has been the Smith’s kitchen, cosy but arguably not very professional! As already stated the block is 35yrs old and although structurally sound, dry and reasonably draft proof, what was considered good 35yrs ago, in this day and age, is deemed totally inferior. Both the kennels and outside runs are far too small and anything bigger than a collie struggles to manoeuvre around its bed to get through the shutter into the outside run and any greyhound residing here needs to be nothing short of a contortionist!

We’re not knocking it, this little block has been a lifeline to thousands of lives over the years, but by today’s standards we know it is sadly lacking. We discussed with a local builder our outlying plans and much of the costing’s done between us, and an estimate of approximately £27,000 was arrived at, although this was without floorcovering, electrics and framework for the outside runs, along with Doug undertaking a lot of the donkeywork. Mike and Jacquie set about putting together an application and not only were they successful in getting the application accepted, the grant was increased to £36,840! We were highly delighted and excited at the prospect of giving the dogs much improved and roomier accommodation, and although not luxurious compared to a lot of the bigger rescues, these kennels were to be much improved on the original.

While we were waiting for the grant to come through the biggest stroke of good fortune and life changing news we could only have dreamed of came our way. JFD has been left a sizable legacy, enough for the charity to Lease (on a long term basis) or maybe even purchase a large portion of the land and outbuildings here, which would enable the charity to be totally self-sufficient and independent from the house and boarding kennels, enough land also to incorporate two exercise yards and a large fenced off paddock, with land to spare to eventually build a small tea-room and shop (for fund-raising events) in which to sell donated items. This legacy will totally change things for JFD and in the long-term secure its future for many years to come. Within the area to be purchased there is also an outbuilding that can be converted into a dwelling for any manager/caretaker who takes over from Margaret & Doug when they retire (hopefully not for a long time yet)! In the short term we are going back to the drawing board to plan a far more adventurous centre. Taking over permanent residency is an exciting step for the charity as it will open up many avenues of grant applications which have never been available to us before.

Because our kennels are now to be built on a grander scale we have employed the help of an architect. In brief, our new centre will also have a laundry room, food prep room, isolation, sick bay/vet room, whereas the original plans were for the rescue to continue using the boarding kennel’s utility rooms. For Margaret the most exciting part will be a small luxury annex for our three long-term dogs, which may possibly live the remainder of their days at JFD. We are a rescue with a strict none-destruct policy where only terminally ill dogs that are suffering are put to sleep – terminally ill dogs that are not yet suffering usually go into a foster home with one of our trustees, in order that they can live the remainder of their days, however short, in a warm and loving home. We currently have 6 long-term dogs that have been with us between 3 and 6 years but we remain hopeful that two, possibly three, will eventually find their forever homes.

We were hoping to begin dismantling and doing the groundwork at the beginning of January 2016, with the kennel block being completed by late spring/early summer but frustratingly, we fell at the first hurdle! An ecology survey, suggested by our architect, proved we have a great crested newt population, indicating we were legally bound to have between 4-6 ecology surveys, not just on our pond but also a pond belonging to our neighbours. The total cost of the ecology surveys, to establish the GCN population has cost our modest charity a total so far of £5,044.80!!! Add to this figure the architect’s fees of £4,395.00 AND the planning application fees of £2,310.00, it will come as no surprise that, at a total cost £10,749.80,  we are already over-budget and we haven’t, as yet, even laid a brick!

As a frustrating point of interest, Great Crested Newts are not endangered in this country however, they are in parts of Europe and our humble little island must abide by EU rule!!

Margaret spoke to the British Wildlife Trust and asked the question ‘What would happen if someone went ahead with a building without the ecology surveys and subsequent newt fences’?

She was told in no uncertain terms ‘If you went ahead without our permission, we would call in the police. We would send a team of ecologists (at a far greater expense to yourselves than the ecologists you would employ) and we would assess how many newts you had killed by building your kennels. We would then take you to court and fine you £5,000 per newt so, say you have killed 100 newts, work it out for yourself. Oh, and the offence can also carry a prison sentence too’!