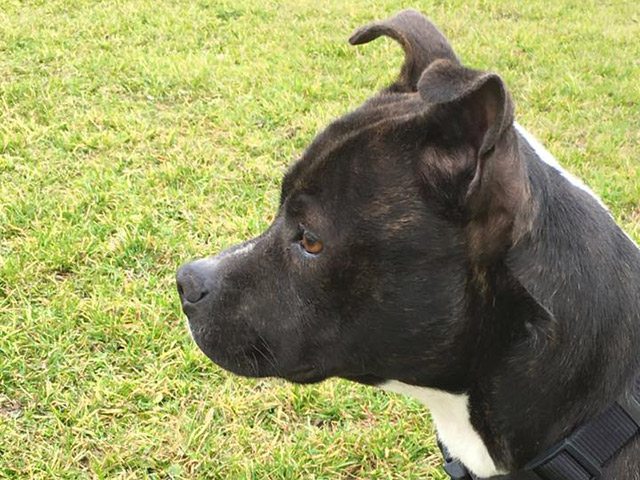 On the evening of Saturday 12th March we were messaged by a follower of the group ‘Urgent Poundies’ This organisation have contacts with many dog pounds that will destroy a stray dog if it remains unclaimed once it’s statutory seven ‘holding’ days are completed.

Upon visiting the ‘Urgent Poundies’ Facebook page we were saddened to see photos of three dogs that were due to be destroyed on the morning of Monday 14th, with a fourth dog due to be PTS on the Wednesday. 💔

After a quick mental assessment of our none- existent-available-kennel-space we decided at a stretch we could offer a lifeline to two of the four dogs.

By Monday lunchtime 2 yr old Spud and 5 yr Polly, having stared death in the face for seven days, were delivered safely to the arms of JFD by a lovely member of the Urgent Poundies transportation team.👼

To say these two dogs are an absolute delight would be an understatement, in fact it’s safe to say they never put a foot wrong! The pair were firm favourites of all our dog walkers here, as both dogs walked together beautifully and neither pulled on the lead.

On their first vaccination and vet check Polly promptly decided to give Paul a quick face wash and if the identichip needle caused her any discomfort she certainly didn’t show it! Having their eyes, teeth, ears, and tummies examined and their hearts listened to was interpreted by the two dogs as a sign of affection on Paul’s part and they showed their appreciation throughout the consultation by wagging their tails non-stop!!😊

Thankfully these two treasures were soon rehomed, Polly within a week, although it did take Spud 3 months to find his happy ever after (you can read their rehoming stories on our ‘Happy Gotcha Day’ page)  We must all bear in mind how vital it is that people adopt from rescue centres in order that valuable kennel space becomes available for the next desperate little doggy – who knows the next two death-row Poundies might not be so lucky!

PS. I know you will all be thinking ‘but what happened to the other two ‘pound’ dogs’?
We’re relieved and delighted to say that both dogs went on to be saved by two other rescue centres further afield!😅💕🐾