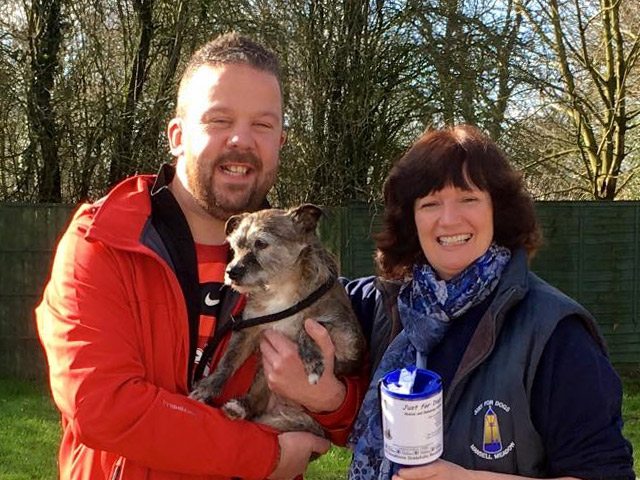 Thank you to Sid and Jean Coxon and customers of the Okeover Arms, for their kind donation of £25 raised via a JFD collection tin on the bar.

It was lovely to see the adorable little Sandy, who was adopted from JFD over 12yrs ago. She arrived at our doors as a stray, not only requiring surgery for a damaged hip, but also carrying a litter of puppies, although the latter did not become evident until after she was rehomed! All puppies were successfully adopted leaving little S…andy to accompany Sid on life’s journey.

She has been by his side through all Sid’s trials and tribulations – from being a bachelor to becoming a happily married man, a father and a successful publican and was also a huge comfort when his beloved father died quite suddenly and then again when Sid lost his dear mum just a couple of years ago. 💔
Sandy is never far from Sid’s side and is his co-driver and navigator on his trips to the cash & carry & wholesalers etc.
Hell’s teeth Sid! You’ve had more than your money’s worth out of Sandy, we should have charged you double the adoption fee all those years ago! 😂xx