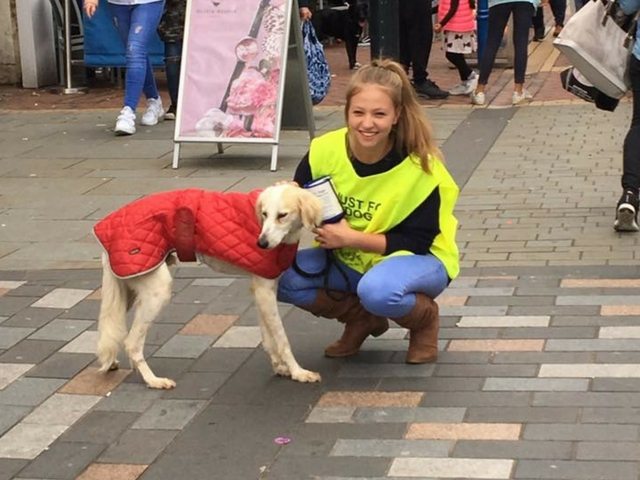 On Saturday 10th June we released our wonderful volunteers into Derby City Centre in an effort to raise funds for JFD. We got much more than that!!

Overall we raised £689.34 for the rescue which is a great success. In addition to this, Tinks, our adorable little Dachshund, has managed to secure herself a 5* home with the Crew family! An update will be posted following a visit to JFD by other members of the family, both 2 & 4 legged.

However, on another rather sad and upsetting note, we are all agreed that today has demonstrated to us examples of the very best and sadly the very worse in the human race.
Throughout the day a few of us were harassed by a somewhat inebriated and abusive individual. By late afternoon his behaviour had clearly deteriorated further when he became highly aggressive and physically threatening to two of our young volunteers who, incidentally, had already worked a full shift in the kennels from 7.30am onwards, before grabbing a quick lunch in order to volunteer their services (we had a shortfall of helpers) for the last two hours of the day’s collection.
Realising that both the dogs and themselves were in a very vulnerable situation the girls understandably became somewhat upset and panicky, when suddenly, from nowhere, they became surrounded by some lovely members of the public, whilst others intercepted the ‘drunk’ and manoeuvred him away!
The girls then became the centre of much more desirable attention, as well-wishers sat them down, offered to fetch water etc. and a local coffee shop assistant offered to get them a hot drink and invited them to sit inside saying ‘dogs were welcome also’ meanwhile another witness had called the police who made an appearance PDQ, gave the drunk, who was ‘known to them’, a good talking too and moved him on.
After such an ordeal one would have expected the girls to have called it a day and to have made their way home. But not our girls! They hadn’t completed their ‘stint’ so they decided to carry on until ‘the close of business’! Aww bless!
We owe a huge debt of gratitude to everyone who came to our rescue today, who rendered a very volatile situation to nothing, didn’t turn a blind eye or cross over to the other side of the street. Thank you so, so much.
Mahoosive thanks to Danny, Barbara, Gabby, Shirley, Olli, Helen, Aunty Pat, Louise & the lovely Freya for giving their free time so willingly and most importantly so happily and with a smile!😇
Also to four of our best friends, Buddy, Lily, Tinks & Theo, who kept us company throughout the day!

See you next year and hoping that in the meantime that abusive drunk has been to rehab!😝