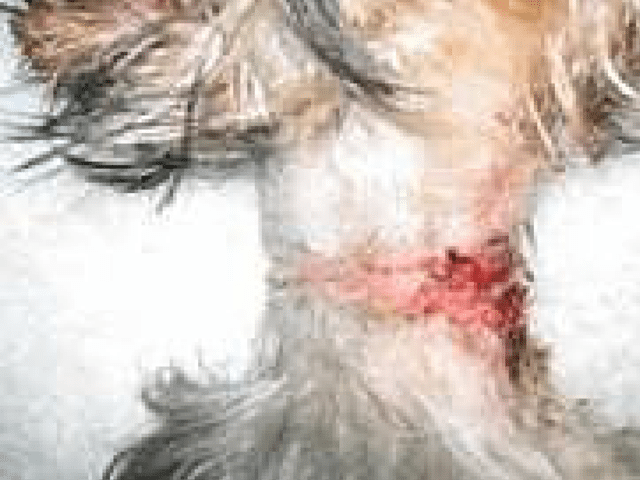 We were asked to collect this little man from Ilkeston police station and told that he had an injury to his neck. On his return to the kennels we were conscious of the vile smell of rotting flesh. Upon closer inspection we were horrified to discover that Freddie had
outgrown his puppy collar which was now embedded into his neck! He was taken straight to Blenhiem Veterinary Centre and operated on immediately.

We were told that new tissue had grown around his collar – even through the buckle – and that the collar had to be cut in seven places in order for it to be removed.

He was wonderfully cared for all week by the staff at Blenheim, who became very attached to him whilst admiring his bravery – although suffering dreadful pain Freddie allowed his wounds to be regularly washed and dressed without complaint. This is yet another alarming story of a pedigree dog, bred out of pure greed and ending up, in just four short months, in agony, neglected and abandoned. In order to halt poor Freddie’s suffering Just for dogs faced another vet bill, borne out of human greed and error on behalf of his breeder. Freddie was adopted by a Blenheim staff member and soon went to his new loving, forever home, where his suffering soon became just a distant memory and to a future filled with love and care. We at JFD believe every dog has a right to the treatment required to put them on the road to recovery, but as with most things in life it comes with a price.