Cheetah has found his safe haven! 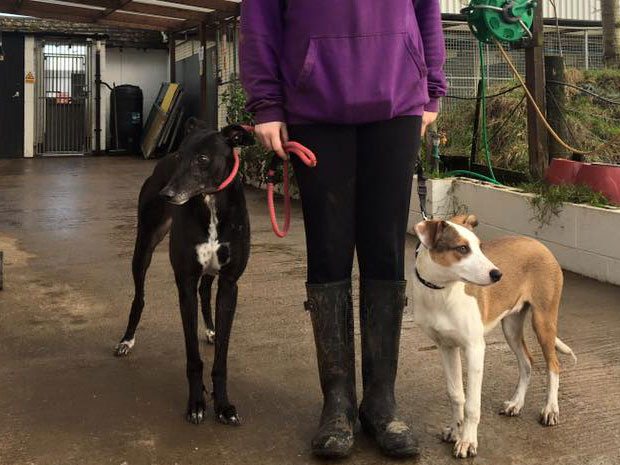 On June 15th 2016 a concerned supporter brought this gorgeous boy to JFD. Here’s our post from that day:

‘Found wandering, this morning at junction 28 M1.
Male Greyhound, not neutered, not microchipped, but tattooed in both ears.
Does anyone know of any reports of him being lost or stolen or has he just been dumped?!
Please share to help spread the word. Thank you.’

Although we had a flurry of interest shown in him, Cheetah remained at JFD until this Saturday morning when Hannah and family (including her cute young Border collie Misty) came looking for a dog to rescue. Here’s what Hannah tells us about the first 24hrs of Cheetah’s new life:

‘Hi thank you so much for letting cheetah come home with me, he has settled in so well and has found his place on the bed lol! He has come out of his shell and has given me cuddles and has a really waggy tail. He has been on a walk with my other dog and seen horses and was not bothered by them at all he has also been for a run on the extension lead and loved it. He’s very fast!
PS I think I have lost my bed. Lol’!

So, after 202 long nights lying in his bed at JFD dreaming of what might be, Cheetah is finally given the home every dog deserves.

It’s just a case of being in the right place at the right time!

So don’t feel sorry for Cheetah or any other dogs at JFD as, for the majority, we are but a stepping stone to a better life, usually better than they’ve had but not as good as they’re going to get and often being the first time they experience love, kindness and security.