An empty dogless house is not a happy place 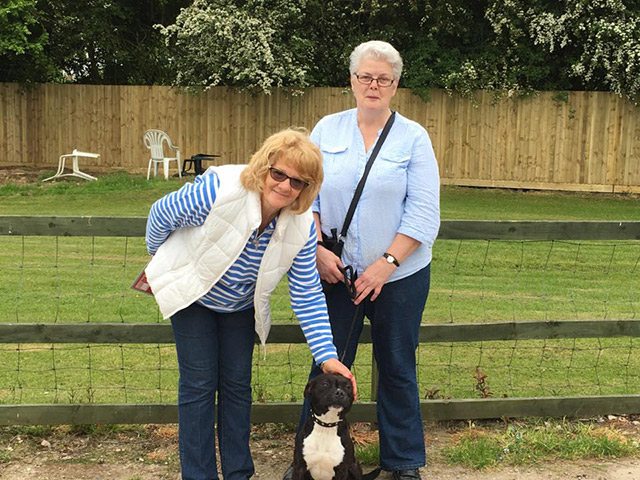 Exactly nine years ago to this very day Shirley Fearn and her friend Sue visited JFD to look for a special companion and family member for Shirley. The visit was highly fortuitous for one little Staffy girl called Miss Piggy (later re-christened Fudge) as she was swiftly adopted and a match made in heaven was the result for the proceeding years, until Fudge’s sad demise a few weeks ago – please see our post of May 16th 💔💕

But, an empty dogless house is not a happy place and Shirley thought the time for grieving should end as it is of no use to all the needy abandoned dogs wasting their precious lives in kennels nor will it bring the much adored and treasured Fudge back.

Spud arrived at JFD via the brilliant organisation Urgent Poundies, who
appeal for rescue spaces on behalf of council pound doggies that are on their final days and imminent death is their only way out! Once a space is secured Urgent Poundies then collect, transport and deliver the dog to its safe haven as said dog remains totally oblivious of what a lucky escape it has had! So, this was Spuddy’s first stroke of luck (we’ll say nothing about how unlucky he was to have arrived at a council pound in the first place)!!!

Anyway all this happened almost three months ago, which is unbelievable to think such a beautiful dog like this has been over-looked for so long. Spud has a huge fan club here all of whom would be more than willing to give a 5* character reference on this lovely lad’s behalf.

Dear Spud,
As we set you on your new adventure, may we wish you all the luck in the world, no dog deserves it more than you! May we also say:
‘Big up’ to Urgent Poundies
‘Hooray’ to Sheila Fearn
‘BOO HOO’ to all the pounds that take the council stray dog fees only to abandon the dogs seven days later
And ‘thumbs up’ to us – JFD, Derbyshire’s little dog charity with a big heart and a strict no-kill policy! 😂